I must admit the title of this blog post made me smile a little!  Sounds like one of those old stories I read when I was a child, usually involving four or five intrepid children and a dog off on some treacherous adventure.  Today was not quite so dramatic as any of those stories, but it was an adventure for us nonetheless, and I must start by saying thank you for making today wonderful, when it might have been otherwise.

Today we visited a local visitor attraction, Cannon Hall Farm.  It is about a 45-minute drive from home, in Barnsley, South Yorkshire, and is home to lots of animals that you can get close to. At this time of year, in the Spring, the farm gives birth to new life in the form of tiny piglets and little lambs and if you are lucky with the timing you can get to hold a guinea pig and stroke a fluffy rabbit too.  We arrived just after 11am, and you were excited about seeing the ‘aminals’ as soon as we got out of the car.  I’ve visited many times over the years, but this was the first time you were seeing it with your eyes, and it was magical.  I love seeing life through a child’s eyes.  Everything is new and wondrous and those big blue eyes sparkled with excitement at every new thing that you encountered.

We paid our £5 entry – there’s a special offer on at the moment and you were free anyway, so it was most definitely good value for money!  We bought a bag of animal feed too, so you could interact with the animals.  We were presented with stickers to wear to show that we had paid our way, but even though I confidently placed mine on my coat, you were reluctant to allow me to do the same with yours.  See, you have developed this fear of stickers, presumably a mixture of ECG memories and the steady flow of sticker offerings at every medical appointment, but whatever it is those stickers cause you to recoil, and back away like I have some kind of venomous creature in my hands.  I managed to convince you within about half an hour that you had to wear your sticker if you wanted to feed the animals – you may only be 22 months old, but you are  bright as a button and you were really keen to send the food down those chutes.  I took the small victory, and punched the air in my mind.

You were mesmerised by the Meerkats and ran up and down the enclosure as they chased you from the other side of the glass.  Seems they sensed your fun and wanted to join in.  And then we went on to the breeding barns, led by a very eager you running off ahead, giggling “What’s in there?!” as you ran. You adored the pigs and their piglets, and toddled excitedly from barn to barn shouting “Bye bye!” to the animals as we left them.  You weren’t too keen on the tractor cleaning out one of the stalls, but we moved on quickly enough for you to forget about the monstrous roar of it’s engine as it shovelled away all the muck and straw.  You gambled on the blue ferret to win the race, but sadly it had no intention of leaving its starting block and lay there curled up in the warm Spring sunshine, along with green and yellow, while red took the title with ease.  We walked past the birds on our way to the sheep enclosure, where you delighted in the sounds of the lambs, remarkably like new born babies crying for their mummies, until one of the ewes decided to utter a deep, groaning “baaaa” and you ran screaming “Help me, help me mummy” until I scooped you up and headed back towards the centre of the farm!  As we passed the birds again on the way back, I saw the network of tunnels in the children’s play area out of the corner of my eye.  Silly really, that it was the sight of those tunnels that drew an inward gasp and brought a tear to my eye, but I quickly brushed the thought away as we headed back to see the meerkats again – they would bring back the smile in an instant.

We had pretty much exhausted your attention span, and the use of your little legs, by around 1pm so we popped into the restaurant for some lunch.  I ordered a sandwich and chips for us to share and we took a seat in the corner where I could pen you in at the end of a row of benches!  You like to wander, and I needed you to stay put and eat some dinner.  On the table next to us were an elderly ‘couple’ (I could tell by their conversation that they were not married, and later found out that they were both widowed friends).  Both the lady and the gentleman were showing an interest in you.  I mean, at risk of sounding sycophantic, you do draw attention to yourself. Those huge ocean blue eyes, and your little curls, along with this way that you carry yourself that defies your 22-months on this Earth, seem to gather interest everywhere we go.  You are quite simply captivating.  I don’t know what it is that you have, but I guess although it sounds like far too mature a word to use to describe you, I would say that what you have is charisma.  Oodles and oodles of charisma.  Whilst I am most definitely your number one fan, you seem to be gathering a following wherever you go.

Anyway, to get back to the point of our ‘adventure’.  After a number of musings and comments from the couple next to me, the gentleman remarked at how clever you are – he had been observing you when you were let down from the table and noticed how considered every move you made was.  He said you seemed to be well aware of everything and everyone around you, and he said “She’ll go far that one.” He said you seem ‘lively’ and I laughed and said “Oh yes! She keeps me on my toes!” and the lady replied, “Yes, but better to have them like that,  than in hospital poorly.”  I could have brushed over that comment, but instead I remarked that you had indeed had your fair share of that, and of course this sparked some interest in your situation.  “In fact, the last time we were here was the day before she became sick.”

And there it was; the reason for our visit.  We have not been back to Cannon Hall Farm since that day before our lives were changed forever.  Saturday 30th May 2015; you were 7 weeks old and it was our first outing as a family.  I don’t know why we haven’t returned to visit the farm really.  There is absolutely no suggestion that your illness was linked to the farm, and whilst the cause is unknown so it could never be completely ruled out, it is more likely to be just a coincidence and bad timing.  I think I just didn’t want to undo the memory of that perfect moment in our history.  I mentioned earlier that the sight of those tunnels was the only thing that triggered an emotional response (though I had been working hard to suppress the emotions I could feel crushing my chest all the morning).  I guess it’s because we spent a while there whilst your brother and sister got themselves lost in the maze of tunnels.  I think I fed you as we sat on a bench and watched the children playing in the early Summer sunshine, and congratulated myself on this perfect life we had created.  And up to that moment, Peanut, it really had been perfect.  You were perfect.

That day in 2015 at Cannon Hall Farm marked the end of perfect for us, or so it seemed.  It feels so unfair that things changed so early on in your life, before we had a chance to make any more perfect memories.  I guess I’ve wanted to preserve the memory of that day, hold on to the precious moment that is captured in sepia images in my mind.  It has been a huge flag on a timeline, marking the change from perfection to imperfection, and giving me something to grieve, to pine for.  But do you want to know something, Freya? What I realised today is that there was really no need for me to hold that moment on a pedestal as something to be quite so treasured.  Because, with the exception of 6 long weeks in a hospital cubicle and all the trauma of 2015, every single moment with you is something to be treasured.  Yes, I felt sadness wash over me when I remembered how carefree and wonderful our lives seemed on that day at the farm, but when I sat and thought about it I realised that without what happened to you, without Kawasaki Disease and it’s gifts (yes, you detect sarcasm) then we wouldn’t have experienced the wonder of today.  Without Kawasaki Disease, I would have returned to work after a year on maternity leave, and our moments would have been reduced to the same precious hours on weekends that your siblings were lucky to grab in between the mountains of washing and ironing.  Because of Kawasaki Disease, you now have a broken heart and an uncertain future.  But because of Kawasaki Disease, I now have a heart that is capable of feeling more than it ever had before.  It showed me a glimpse of what it might feel to lose someone I loved, and made sure that I will never take you, or anyone else I love, for granted.

Of course, I wish that we had never been introduced to this insidious disease.  I wish that you hadn’t been so little and therefore susceptible to the very worst that the disease had to offer.  I wish we didn’t have to face a future with hope, but no guarantees.  Our lives would have been so different without it, but I am not sure if our lives would have been better.  Is that wrong? I don’t know.  I just know that what happened to you in 2015 created an opportunity for me to be a better version of the me I had once been.

Today, as I saw the wave of sadness cross that lady’s eyes when I told her that you had a damaged heart, it struck me at how terribly unfortunate your circumstances must seem to someone on the outside, even if, as the lady said, “You wouldn’t know to look at her!”  But to us, this is just our normal.  Today I realised that what we have is not an altered you or a changed you.  The you we had for 7 weeks at the start of your life with us was wonderful, but it was not a patch on what was yet to come.  You have given us 22 months of extraordinary, and I cannot even begin to put into words how grateful I am to you for today, and all the days just like it, both in our past and in our future.

Whatever it is that radiates from within your little body, it takes my breath away and  I love you with all my heart. 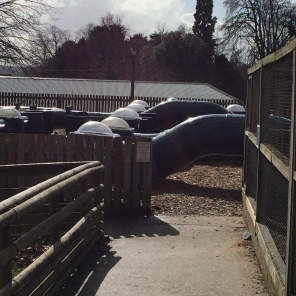 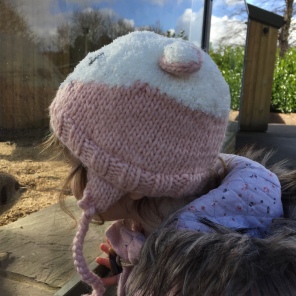