So today has been a Kawasaki day; I’ve spent most of it either conducting research, replying to e-mails or producing information slides.  Not quite what you can call getting back to normal.  But needs must, and if I didn’t spend as much time reading and learning as I do, then I would be at the mercy of our medical profession who are great, but can’t seem to agree on the right treatment or after-care for this disease.  It makes me so angry that I don’t feel I can rely on the information I get because at every turn there is something that will contradict the last piece of advice you were given.  Just when you feel like you are getting somewhere, another nugget will drop in your lap and you’re right back to square one.

So, what did I achieve today?  Well I’ve been battling for a while over how to catch Freya up with the immunisation schedule.  Because she was only 7 weeks old when she went into hospital and has since received treatment that affects the immune system, she has not had any of the 8, 12 or 16 week vaccinations.  About a month after Freya was discharged from the Children’s Hospital, we were advised that she could be given any of the killed vaccines, but no live ones.  I was not given any indication of what was live and what was killed, so had to turn to the internet yet again.  I called our Health Visitor to ask for clarity and they confirmed that all of the routine 8, 12 and 16 week vaccinations are killed (or inactive) with the exception of Rotavirus which is live.  The flu spray is also a live vaccine, but this isn’t routinely offered to young babies; the flu vaccination is inactive however, should Freya be required to have it.

I still felt uncomfortable for some reason.  I guess when you’ve been through an experience like this and realise that the medical professionals don’t always know everything they need to, you are a bit less likely to take the first bit of advice you get.  So I debated and procrastinated until Freya’s next Rheumatology follow-up appointment.  I raised the subject again and our consultant said she was fine to get caught up with all of them, as all the standard vaccines are inactive.  I corrected the doctor and advised him that Rotavirus is now included and is indeed a live vaccine.  You might gasp in horror that a doctor didn’t know this simple piece of information, but what I have learned from our experience in the hospital is that when you specialise in a certain area you really can only be expected to retain the knowledge for that specialism.  Outside of that there are other specialists for different disciplines, and if that fails…well, there’s always Google!

The decision was reached that Freya could have any inactive vaccines immediately, but that we needed to wait for 3 months post-steroid treatment before giving her any live vaccines due to her immune response being suppressed.  I asked about whether Freya should have the chicken pox vaccine because of the risk of a pretty nasty (and potentially fatal) illness called Reyes’ Syndrome which has been known to occur when a child taking aspirin contracts chicken pox (and influenza, I’ve found out today).  The response was that the chicken pox vaccine is only given to children considered at high risk of catching chicken pox.  I replied that whilst Freya might not be high risk for catching chicken pox, she was at risk of developing Reyes’ Syndrome as a result of being on aspirin.   Right now I can protect her from chicken pox to a certain extent, but next year if she has to go into childcare how do I protect her then?  The doctor agreed to take the question away and come back to me with a response.  That response came by way of a letter, confirming that following consultation with Immunology it was agreed that it would be prudent for Freya to have the chicken pox vaccine, it should not be given sooner than 3 months post-KD treatment and we could go ahead and book her in with our GP.  I also e-mailed one of the consultants that looked after Freya in Leeds, who responded to say that there had been little research in this area and as such I should make a judgement call.  Still I felt uneasy.

Since then I have had many conversations with the Health Visitor, and spent countless hours online reading everything I could about immune response and immunisations.  Some of what I read scared me; for instance, a child on aspirin should not have the chicken pox vaccine due to the risk of Reyes’ Syndrome.  Good job I didn’t take Freya right on down to the Dr’s surgery to inject a little dose of the pox into her.  In fairness, I had already decided that I would catch up the inactive vaccines, but leave the live ones until next year when the need for them would be more pertinent.  I had even made the appointment, but after receiving the “make a judgement call” e-mail, I decided to do just that and cancelled the appointment.  One thing I have learned about this KD journey is to trust your gut instincts.  Mine were pretty spot on all through this illness, and even when I tried to convince myself I was wrong, I was over-reacting, my gut won out.  I just couldn’t shake an uneasiness that would creep up on me every time I thought about vaccinations.  I needed to do more research.

As well as research, I’ve kind of gone on a one-woman crusade for Kawasaki Research this last week or so!  I’ve bombarded people on Facebook with please to sign the support group petition.  I’ve just spent a couple of hours reproducing one of the support group’s guide for parents as they didn’t have a soft copy to share.  One morning I woke up feeling so cross that I couldn’t get the answers I needed and angry that parents are basically having to fend for themselves, that I penned an e-mail to our local MP (Ed Miliband) and contacted the local press!  I received a holding letter from the House of Commons this morning, and the local newspaper would like to run a story on Freya to help me raise awareness.

As a last-ditch attempt to get some clarity on Freya’s immunisations, I e-mailed 2 Kawasaki experts; one in the UK and one over in San Diego, California, and yesterday I received the answers that I needed.  Although I have yet to discuss their responses with our doctors, the new information which states we should wait longer before giving Freya any vaccinations at all.  I’m not going to include all the details here as I’ve posted the slides I have pulled together on http://www.facebook.com/freyasstory.  I feel like a weight has been lifted and that I now fully understand the reasons why the immunisation question is complicated.

It’s a bitter-sweet journey with Kawasaki Disease, perhaps with any childhood illness.  I’ve said before that one of the hardest things about KD is the lack of consistent information, and with there being no UK protocol for standard diagnosis and treatment the advice you get differs depending on who you speak to on what day of the week.  That’s why the petition is so important (sorry, can’t help a plug when I get the opportunity!)  Just as you feel that things are getting back on an even keel, something else comes up and bites you in the arse and you’re back in the dark place you thought you’d escaped long since.  And then I remember that Freya is only 5 months old, and it was just 8 weeks or so ago that we returned home after her ordeal.

Today was a day like that, down one minute and up the next.  One of the reasons was the communication between me and the specialist in America.  And she isn’t just any specialist – she’s known as a world leader in Kawasaki Research, having dedicated the best part of the last 20 years or so to trying to find the cause of this disease.  We were to-ing and fro-ing with different questions, facts about Freya’s medication, etc when we got onto the subject of coronary artery aneurysms and anti-coagulation therapy when I mentioned that it would appear that Freya didn’t have a typical balloon-shaped aneurysm, but that her arteries were significantly dilated throughout the whole artery (well, the bit they can see from an echo anyway).  I knew that had meant things were pretty scary for Freya at their worst, but assumed that now the arteries were regressing that she was no longer at risk.  I’d asked the professor if she thought that it was in any way remarkable that Freya’s arteries had regressed so far so quickly:

“Many young [patients] have rapid remodelling of the arteries, so not surprising that Freya did well.  Important to remember that these are still damaged arteries and she will need life-long monitoring…The long segment dilated arteries are actually at greater risk of thrombosis. See attached.  You might want to share this with your cardiologist.”  And the hits just keep on coming.

I haven’t read the document she sent me. I’ve printed it for reading another day when my head is ready to get away from immunology and back to cardiology.  As long as I read it before the next cardiology follow-up in November, we’ll be ok.  Sometimes I wonder if I ought to do a medical degree!

But, like I said earlier, a life with KD is bitter-sweet, and I am glad that today I get to leave my blog on a high note.  After I received the above response, I replied to the doctor to ask if she felt that under the circumstances it was appropriate for Freya to be treated solely with aspirin and asked for an opinion on anticoagulant therapy.  This was her reply:

“…does not qualify for systemic anticoagulant now but did at start.  We would treat with dual anti platelet agents…I suspect she is safe and fixing the problem on her own.  Well done, Freya!”

That is an e-mail I won’t forget in a while, because in just a couple of brief sentences a doctor over the other side of the world who has never met Freya or seen the details of her case, managed to sum up just how remarkable Freya is.  She has had to deal with more in her short time here than some of us will ever have to deal with in our lifetime.   She barely cries, she takes to every new experience like she’s been here and done it all before.  She is calm and content, and absolutely beautiful.  She is my little Peanut, and she is a Superbaby… 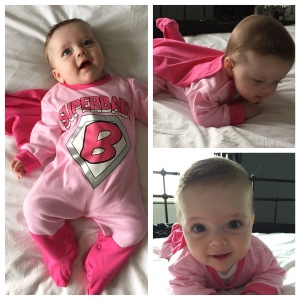 2 thoughts on “A productive day and a Superbaby”