Today was just like any other Monday.  I look forward to Mondays, unlike most of the (working) population.  That is because I am currently on a career break and after a weekend with all three of my very lovely, but very lively, children, I quite like getting back to being just me and the little one (my 15-month old daughter).  Today was no exception, and to start the week off on the right foot I had arranged to meet a friend for a coffee and a catch up with our most recent family additions (I could have just said babies I guess, but why use one word when you can use half a dozen, eh?!)  We had agreed on 10:30 as a good time to meet, but partly because of my general levels of disorganisation and partly because of little buckles that are almost impossible to fasten and pram straps that eluded me beneath the packet of gummy bear paws my little one was clinging on to for dear life, I arrived ten minutes late.

The café was quiet, with just one other group of ladies sat down, and so I joined my friend and ordered myself a coffee.  I had waited all morning for that coffee, skipping a morning drink or breakfast at home so I might enjoy it all the more.  My little girl was pretty well behaved.  She is walking, and she likes to be on the move all the time, so she did well to sit in her pram and listen to me and my friend chatting away about our latest little dramas.  She babbled to her little friend, played with toys, and munched on a biscuit quite merrily.  My friend’s little one was getting tired, so I suggested we go for a walk and was preparing to leave when my daughter let out a high pitched squeal.  Just the one.  Now, I know that in the past she has earned herself quite the reputation of a screamer, but that was when she had just found her voice, was ready to move but not quite able, and could not express her frustration in any other way.  Nowadays my little girl can communicate much more effectively by pointing, using her albeit limited vocabulary, or the little bits of sign language she has cleverly learned at home, so the screaming doesn’t tend to feature.  It made an appearance today, just the once, but was in fairness loud enough to bring all the dogs from the neighbouring area.

Cue nearby ‘lady’ who demonstrably places her fingers in her ears, snaps her head round towards me with enough force to cause whiplash, screws her face up with anger and hisses loudly “OH FOR GOODNESS SAKE!”

This is where the paradox of intolerance comes into full force.  This lady is clearly quite intolerant in character.  Intolerant of noise in general perhaps? Or just intolerant of children?  Maybe just intolerant of mothers daring to take a moment away from the kitchen sink to enjoy time with friends.  Perhaps her intolerance only extends to my daughter and her individual squeal.  The question is, should I tolerate her intolerance? Accept that she has an issue with said individual squeal and as much right to articulate her opinion with a rather venomous hiss?  You see, if I choose not to tolerate her intolerance, then in fact I too must accept the label.  It’s an interesting debate.  But whether we call ourselves tolerant or intolerant is kind of immaterial, because today Mummy chose not to ignore the nasty lady.

Now to set the scene, you need to understand that I am not someone that seeks out confrontation.  I will defend myself and others if it is necessary and right to do so, but I am more likely to let something go than to start a fight.  I am not the girl that gets into rows with friends after one too many Pinot Grigio’s, neither am I the girl that hurls expletives at the person who just cut me up on the motorway.  I can be a little highly strung at times, and yes I admit to getting stressed out with everyday life sometimes, but I am no fishwife. I don’t know why I chose today to get into a public debate with this woman.  I think had she even muttered the same words under her breath I would have forgiven her for struggling with my daughter’s dulcet tone.  But there was something in her face that brought out the fight in me.  It was something bordering on contempt, and it was directed at my child.

At first I felt shaken and in shock at the blatant manner in which the lady displayed her utter annoyance at the one sound my child had made.  I felt the tears building, and started to collect my things together.  I said aloud something along the lines of, “I cannot believe how rude that was!”  To which the lady responded that it was I who was rude, that I should appreciate that I was not the only person in the cafe and remarked “Why should anyone have to listen to that?!”  I said, through my tears, that I had never before been made to feel that way about being out with my child, to which she mocked, “Oh, don’t be so ridiculous!” and when I said that she had no idea how she had made me feel, she responded with more accusations that it was ridiculous, that I had been in there over an hour (I hadn’t), that I needed to take my child home and that it was obvious she needed to go to sleep!  I told her not to tell me what to do with my child, but she responded to confirm her right to tell me what to do with “I have been a mother!”.  One of her friends began to try and interject, tried to tell her she was wrong, but she continued to berate me for daring to have a child in the café for what she considered to be over an hour – not that it is of any consequence, but I arrived at 10:40, spent 5 minutes in this awful debate, went to the shop next door, walked to my friends’ and arrived at her house at 11:30 so I can’t have been in there for any longer than 30 minutes –  and that she did not see why she should have to be made to listen to my child‘s noise.  As I left, which I did because I just felt like running, I turned and said (rather churlishly), “I’m going home now, and when I get there I shall research just how long is considered socially acceptable for a mother to be allowed out in public with her baby.”

Shortly after I left, one of the friends of this ‘lady’ approached me outside (where I was sobbing with both sadness and anger).  She too had decided to leave, and although I felt bad that the ripples had been felt by others in the group, I was grateful that she made a stand and showed she had the grace that her friend is lacking.

To the lady who ruined my day;

I could call you names, my god I really want to! They’d be good ones too, but I’ll leave the name calling to the readers of this blog; I’m sure they’ll have a few choice words.  No, I won’t throw insults, but what I will say is this;

I commend you for whatever status you have achieved in life that has given you the right to choose who is allowed to be in your presence, even when in a public place.  That those around you should behave entirely as you expect them to, and that they should be the ones to leave when they don’t meet up to your expectations.  I personally live with the view that if you can’t take the heat, you should stay out of the kitchen.

I am envious of your perceived perfection.  Personally, I have learned to accept my own failings, to admit when I am wrong and to apologise when I can see somebody is hurt.  I guess empathy is something that cannot be learned.

You said you were a mother.  You may well have a daughter my age; I hope you treat her with more compassion. Do you have grandchildren? If you don’t, then I am sorry that you haven’t yet been granted that blessing.  If you do, I hope that you have the ability to love those dearest to you as much as you cannot tolerate those that are strangers.  I am truly sorry for whatever it was that froze your heart so hard that you could watch a mother cry in front of her child and feel no remorse.

Last year, my child stared Death in the face and although he let her be, he is always in the shadows.  There was a time we wondered if we would ever get to hear our daughter’s voice.  Today every sound she makes (yes, even that one) is like sweet music to us.  Seeing the bitter annoyance in your face today was difficult to bear.  I am sorry that displaying your intolerance and contempt was more important to you than a mother’s heart.

I am not sure what annoyed you most; the noise my child made or the fact that I allowed her to make it. Either way you judged me and my baby girl from one interaction, and I am really sorry that you have not had the pleasure of meeting us both under more amicable circumstances.  My daughter is the single most remarkable human being I know and I am pretty decent too.  I will devote most of my time with her teaching her to be graceful and kind always, to be tolerant of others, and to expect to be taken to task if she chooses to ignore that guidance.

Today I left.  I was bruised, ashamed, sad an in utter disbelief.  I hope that if nothing else, you have learned that there are consequences for bad behaviour, no matter what age you are.  Today I made a promise to myself and to my daughter; we will never be silenced or made to feel unwelcome for living.  We will celebrate being alive with every sound we possess; laughter, squeals, giggles and chatter! And we will never leave again. 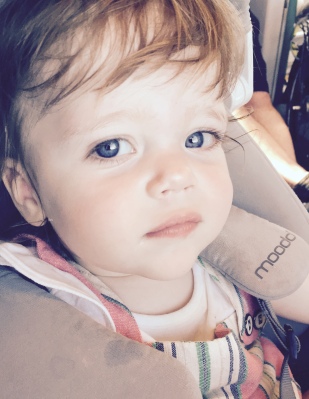