…is that they happen to someone else.  At least that’s what I thought.  What are the odds of my little family being struck by some random illness that nobody has heard of? Well, I’ll tell you. 8:100,000. Those are the odds. 8 in every 100,000 children in the UK are diagnosed with this condition every year. The illness is called Kawasaki Disease. My daughter is Freya.

Today is National Rare Disease Day, so I thought I would focus on that for the subject of my latest blog post. I want to tell you what it means to have a rare disease enter your world.

The thing with a Rare Disease is…

They like playing hard to get.  Some of them are so well-disguised that they masquerade as a number of more common illnesses.  Take Kawasaki Disease.  You take your child to your GP with the symptoms of KD and you’ll most likely be sent home with the word ‘virus’ ringing in your ears. You’ll be told to give four-hourly paracetamol, interspersed with the same regular dose of ibuprofen; antipyretics to keep that troublesome fever down.  Days will pass, but you’ll believe the drugs will eventually do their work once the virus has run its course.  How many days do you let it run its course for? 3 days? Maybe more?  Did you know that there’s a UK medical protocol for dealing witha child  who has presented with a fever for more than 5 days? You’ll tell yourself that the rash that appeared after a couple of days is simply viral.  The eyes look bloodshot; wow this cold really has taken it’s toll on them. And your child is irritable and lethargic all at once, but aren’t all kids when they are poorly? You might even return to the GP, get a course of antibiotics, keep on with those painkillers to take the heat off the discomfort, literally.  Your GP might diagnose Scarlet Fever, or perhaps hand, foot and mouth.  Chances are, your child will not receive a diagnosis of KD until it’s too late. Until the vasculitis that has inflamed every blood vessel in your child’s body has managed to reach their little heart.  Coronary artery dilation and/or coronary artery aneurysms. There’s really only one thing that can cause those in a kid. Kawasaki Disease.

That’s not quite how it happened with us. We were one of the ‘lucky’ ones in that our daughter’s age and the day of the week played a huge part in getting her in the right place at the right time.  At 7 weeks old she was too young for Calpol, and on a Sunday there’s no GP to get it wrong. That said, Kawasaki Disease disguised itself as bacterial meningitis for the first week of Freya’s illness, and then decided to affect her body atypically, making the job of reaching a diagnosis all the more challenging.

It’s quite often a rebel without a cause. Where KD is concerned the cause is yet to be discovered. Without a cause, and with so many children presenting with the illness in a very independent way – not all children get the same symptoms at the same time – there’s no diagnostic test.  The treatment for the disease is effective, but we’re not really sure why.  Knowing the cause of this disease would open the door to swifter diagnosis and better treatment.  With KD it’s a bit of a race against time.  There’s a magical 10-day window within which to treat in order to improve the chances of the heart getting off a bit more lightly. Outside of that, the disease can get too much of a head start. Freya’s heart went from normal to screwed within 5 days.  The disease hid itself well for nearly 2 weeks, until on day 13 (unlucky for some) it went “ta-daa” on an echocardiogram. Nice move KD.

Rare means your doctor probably hasn’t seen it. They may not have even heard of it. So they’re most definitely not looking for it. I’ve spoken with GP’s who have not yet seen a case in their 20 year career. Naturally, doctors will work through the most likely culprits first. They’re not on high alert for some disease that quite frankly sounds ridiculous with its made-up name that conjures images of motorbikes (it’s not actually made up, it is named after Dr Tomasaku Kawasaki, who discovered the disease a few decades ago). But it sounds it. Some rare disorders don’t even have a name. In order to reach a diagnosis for a rare disorder, the medical professionals will have to go through a process of elimination with the more common illnesses that bear the same or similar symptoms. They will test for countless infectious diseases but draw a blank. Do you know, I actually thought they would take my daughter’s blood, put it into a computer and out would come the answer. I had no idea before this, that there were things you couldn’t test for. Silly really. Sometimes the Drs will try certain drugs, only to be baffled by the body’s lack of responsiveness. Our daughter had 4 different IV antibiotics entering her tiny little body, and yet she became more and more sick as the days went on. I couldn’t understand why the Drs weren’t making her better. But our child was diagnosed on day 13 and was treated accordingly. There are people out there with illnesses yet to be named, perhaps even discovered. Those people could wait years for a diagnosis. Two weeks felt like torture. I cannot imagine how that would have felt multiplied into months, let alone years.

If you’ve not heard of it, it can’t be that bad. Right? That’s what I thought. The day before Freya was diagnosed with KD she had a bone marrow aspirate taken in theatre under general anaesthetic. The moment they mentioned bone marrow, I knew they were looking for the ‘C’ word. What they found instead was a whole lot of healthy cells, and she was cleared of that. Relief.  But then the next morning you’re told that they’ve found it! You can’t quite believe it because the last 2 weeks have seemed like an eternity and now the wait is over! They tell you your child has Kawasaki Disease and you actually feel the tension in your shoulders disappear. Aren’t we lucky it’s only Kawasaki Disease. Never heard of that one so it can’t be a bad one. No, the bad stuff everyone has heard of. Leukaemia, meningitis…they’re the baddies aren’t they. No this Kawasaki Disease had to be ok. If it was that bad I’d have heard about it. Wouldn’t I? Except that it is that bad, but you don’t hear about it because your local children’s hospital has probably only seen 4 cases in the last year, and they all looked different.

Rare means there are so many unknowns.  If an illness is rare, it might not have been around for very long.  There might not be many known patients with the disease. Which makes treatment more tricky.  There is no standard UK protocol for the diagnosis and treatment of Kawasaki Disease.  That means you really are at the mercy of the doctors that you are dealing with. Again, I believe we were ‘lucky’.  From the moment a diagnosis was reached they worked tirelessly to aggressively handle this disease. NHS England gave permission for certain drugs to be used on Freya that had not been agreed for use in an infant.  They referred to her case as “a very severe presentation of Kawasaki Disease” remarking that the illness is particularly troublesome in very young babies.

Unknowns are hard to deal with, especially if you’re a bit of a control freak like me. I like to have all my ducks in a row. There’s no chance of that with this. And just as you begin to think things are looking up, KD throws you another curveball.   Long term prognosis is sketchy. But in all fairness, what long term studies have been carried out suggest that Freya might just come through this ok.

Rare is lonely. When you or your child is diagnosed with something pretty obscure you literally feel like the only person in the universe that is going through what you are. Because nobody had heard of KD it felt (still does sometimes) like they didn’t really appreciate the seriousness of it.  Even now, with everything I have shared through Freya’s Story, people ask “So, is she ok now then?”  Never quite quite how to answer that one.  Usually with a “Yes she’s doing really well..” When actually what I want to say is “Yeah, unless you count the fact that’s she now has a heart condition and we don’t know what’s around the corner…”  And it’s not just the general public either. You feel very alone when you’re dealing with Drs that can’t answer your questions because they just don’t know.

That’s where support groups come in. Through the various groups on Facebook I have connected with other parents like me who too have felt scared and lonely. Whilst all of our experiences might have differed slightly, one thing that unites us all is an understanding of the fear when you watch your child begin to slip away from you, and the sheer devastation of hearing that your child has been damaged by this disease. And let’s face it,  the heart is a pretty important organ.

Rare changes you. Since Freya’s illness, I have changed.  I suffer with anxiety, and was recently diagnosed with PTSD. I see a counsellor once every week for cognitive behavioural therapy to help me deal with the trauma of the last year. I find it hard to be around people who don’t understand, or don’t make the effort to. I probably find more comfort in chatting to a fellow ‘Kawamum’ online than I would get from a closest friend.  This experience has left me questioning everything I believed about my role in protecting my child.  I grieve for the healthy baby I gave birth to; the one with the perfect heart. And I am very much aware of our own mortality now. I am scared of dying, and I am scared of loss.

There is an upside. I have met some amazing and lovely people along the way. This experience has taught me that life really is precious and that you should embrace opportunities as they arise. I don’t have the strength for disappointment these days, so I have probably reduced my circle for now, a kind of damage limitation.  I take a lot of joy in meeting people who have been touched by Freya’s Story.   I get messages from strangers that remember when she has a medical appointment, or ask me how I got on at my counselling session. The well wishes and words of encouragement from those people has lifted me from the darkest of moods.

The support from friends and local businesses with prizes for a raffle that we will be drawing on Freya’s 1st birthday has been overwhelming. People are so generous, and I am very grateful to them. I may never come to terms with the fact that this happened to us, to our baby girl. But knowing that Freya has touched the hearts of so many has made this journey a little easier to travel.

So on this Rare Disease Day 2016, I would like to thank everyone out there who is helping to shine a light on Freya by sharing her story and supporting us with our ambition to raise awareness and much needed funding for research. Thank you ☺️ 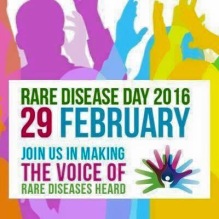 You can follow Freya’s Story with updates on her progress and other KD news at http://www.facebook.com/freyasstory