As we move further away from the traumatic experience we had with Freya during the acute phase of her illness, it seems that I become more and more affected by what we went through.  If you’ve been reading my blog you will know that I recently received a loose diagnosis of PTSD, and am about to embark on treatment for that.  I was given a choice in relation to the treatment that I wanted, based on which element of my current state of mind that I wanted to tackle.  I can have talking therapy to help me get out all of my thoughts and feelings, or I can have specific behavioural therapy and EMDR to deal with the flashbacks.  I still don’t think I really know what route I want to take; I think I’d like to have the opportunity to do both.  We will have to see about that at my next appointment, I guess.

I’ve had a week or so of feeling pretty positive about life in general, getting to grips with the Christmas shopping and starting to look forward to the festive season, but at around 4am this morning, my happiness was rudely interrupted by memories of darker days.  But what is a flashback?  And what makes it more than just a bad memory or an intrusive thought?  I experience all three of those things, and I’m starting to recognise the difference.

Freya awoke at around 3am this morning, which is unusual for her as she usually sleeps through without a whimper until about 7:30am.  Some would say we are lucky it is unusual – the problem with that though, is that I’m just not prepared for it and don’t really know what to do when it happens.  Do we ignore, and hope she goes back off to sleep?  Should I change her nappy? Feed her? Take her into our bed?  I chose to change her nappy, and cuddle up with her in my bed in the hope that she would fall back to sleep.  After about an hour of convincing herself that 3am was the new playtime, Freya yawned! I seized the moment, and placed her back in her sleeping bag in her cot, which is still by the side of my bed (I haven’t quite reached the point where I am ready to put her in her own room).  Despite it being an unearthly hour, I switched on the butterfly that casts stars across the ceiling, and squeezed the tummy of the seahorse that would hopefully sing her to sleep.

And then it happened.

Lying there in the dark, with the outline of her cot just visible in the moonlight and that seahorse playing all too familiar lullabies, I was engulfed by a wave of nausea, and I felt the wetness of tears rolling down the side of my face before I had time to realise that I was crying.  My throat closed up, and I felt that my breath was caught somewhere in between my stomach and my lungs, and I thought I might actually be sick.  Suddenly, I wasn’t in my room anymore.  I was in a hospital cubicle. Cold under the hospital-issue blankets, I pulled them up under my chin and shivered.  Freya was wearing just a nappy and she was so, so hot.  She lay in a nest of blankets made both to make her feel secure, and to stop her from sliding down the cot which was raised at one end.  She hadn’t needed anything to soothe her at home; all she needed was me.  In here it felt like she needed something of her own that she could become familiar with, and so I had instructed her Daddy to buy the pink seahorse on the way to visit at the hospital one morning, and at every nap time and bedtime it’s little tummy would get a squeeze and soothing melodies mixed with sounds of the sea would pour out as it glowed reassuringly in the darkness. 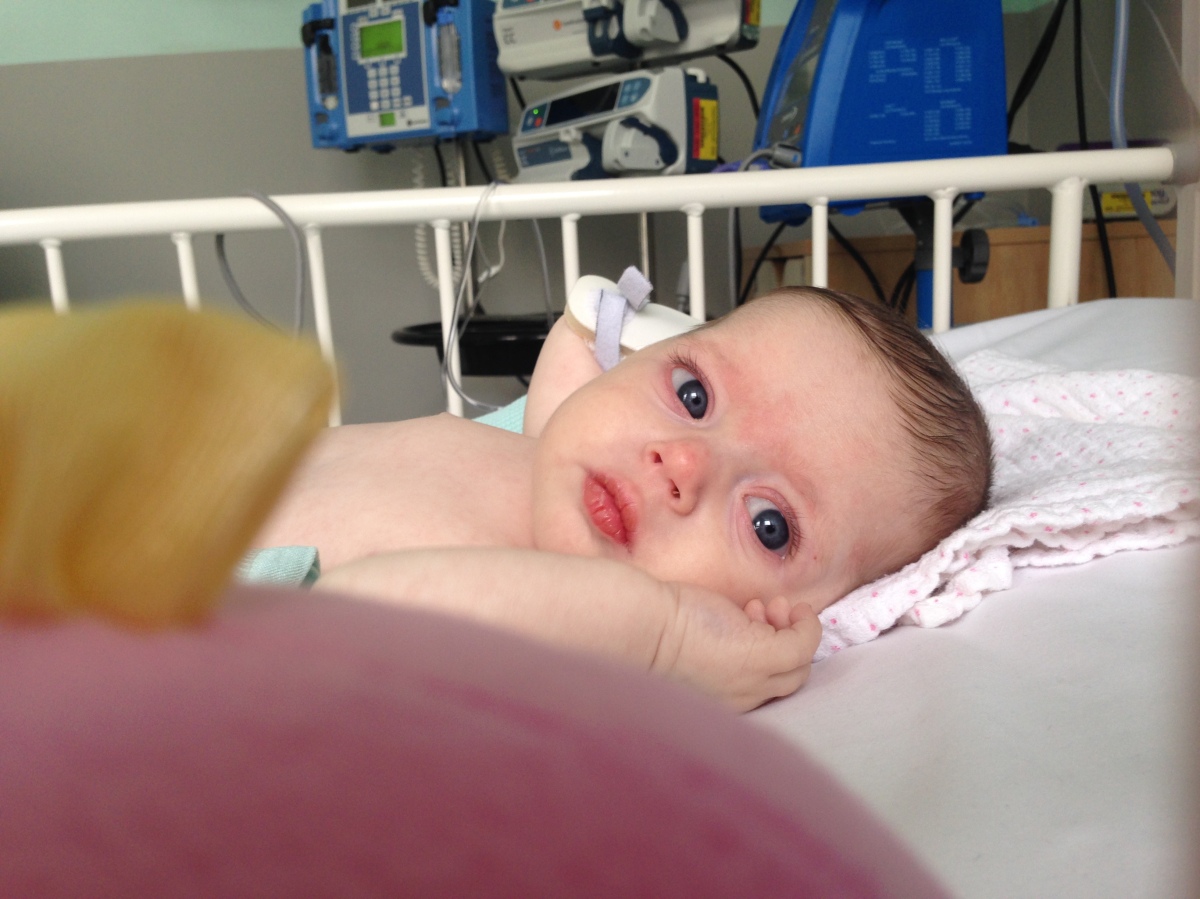 She’s gasping for air, but she won’t open her mouth. She looks like she is drowning.  Open your mouth sweetie, open your mouth.  I panic, jump up, hit the red button, a nurse appears.  A face mask is fitted, attached to a saline nebuliser to help clear Freya’s nasal passages, and she settles down.

I wake up.  She’s crying.  That’s unusual for Freya; we are usually woken by beaming smiles and sounds resembling a bright “Hiya!” from her cot. I open one eye, she sees me.  She smiles.  She is snug in her sleeping bag, pink from the warmth and she looks at me with sparkling eyes.  Eyes that say, “We’re home mummy, we’re okay.”