Going home should have been something to celebrate, but instead I felt scared and alone.  The pressure I felt from the responsibility of preparing Freya’s medication was immense.  She left the hospital on aspirin, lansoprasole (to protect her tummy from the medication), steroids (prednisolone), amoxycillin and fluconazole (they identified Group G Strep infection and oral thrush a few days before we were discharged).  Those in tablet form had to be dispersed in a certain amount of water, and then a specific dose drawn up the syringe to be given to Freya.  The best part about giving the medication was how well Freya handled it.  She sucks on each syringe like I’m giving her a drink!  Now we only have the aspirin and lansoprasole to deal with.

The night before I had left a number of messages via phone and e-mail with the Cardiology team, asking for an urgent conversation with our Cardiology Consultant.  I was consumed by a fear that we were running out of time, and that every minute that passed without adequate treatment for her coronary complications was a step closer to losing our daughter.  I felt sick with worry, and so confused about what I should do.  I mean, this kind of thing doesn’t happen to real people does it!  It happens in soaps and in movies!  Or it happens to someone else.

I had made contact with the KD specialist in the South West of England, and he had concurred with the specialist in Seattle that Freya should be offered an anticoagulant as well as the aspirin she was receiving.  You see, where there are coronary complications the key is preventing the blood from clotting in the artery.  Aspirin keeps the blood thin and flowing nicely, whereas drugs like Warfarin work by preventing the blood from clotting altogether.  That’s why people receiving Warfarin therapy have to be careful with certain activities and are restricted from doing things like contact sports.  I was in no rush to give Freya Warfarin, I mean it’s primary use was as rat poison back in the day!  And I’d heard it was a nightmare drug to administer because you have to be weighed and checked and have blood samples taken on a regular basis.  But I didn’t care about the origins of the drug, or the inconvenience.  If it was what was needed to save my child’s life, then so be it.  The Professor offered to see Freya in person.  I thanked him for his offer, but felt that I ought to obtain a full explanation from our Cardiologist before I made any decisions about how to act.  I gave the Cardiology team 24 hours to put me in contact with the Cardiology Consultant and advised them that I would be taking Freya to Bristol if I did not hear anything by the Wednesday morning.  I was so angry that my first day at home with Freya was overshadowed by this issue, and felt terrible for spending most of that day on the phone or reading and sending e-mails.  But I was doing it for her and it was important that I fight for her.  The US doctor had made me feel like we didn’t have a moment to spare, and I spent those 2 days mostly pacing the house and becoming more and more anxious.  I felt that Freya would die before we had our next follow-up appointment (we all know that wasn’t to be the case, but at the time the fear was very real).

Eventually I received a call from our Cardiologist.  I picked up a pen and paper, and scribbled down everything she said, whether it made sense or not.  She explained that there would be a risk of gastrointestinal bleeding from Warfarin when the patient is taking steroids.  She said that she had individualised the risk for Freya, and that she had considered Warfarin to be inappropriate at that time.  She did say that this might change, but not until the steroids were finished, but that the risks and benefits would change anyway as Freya moved out of the acute stage and further away from the inflammation of the Kawasaki Disease.  She said that there are a number of calculations that can be used to determine a ‘z score’ and that each calculation had resulted in a different number in Freya’s case.  One number had suggested the necessity for an anticoagulant, but another didn’t.  She made a judgement based on what she had seen of Freya.  Then I got the science bit about flow dynamics and the physics of blood flow; that with Freya’s case she was more concerned about lamina flow (not sure if that’s the right term but it’s what I wrote down!) which is apparently the speed of the blood cells moving down the artery.  She said that we should expect further testing in Freya’s future – CT, MRI, Echo, Exercise Testing and angiograms.  All in all she believed in the treatment she was providing, and she did a really good job of convincing me too.  I was considering asking for a second opinion, but that’s not as easy as it sounds and there is a formal process to follow.  Instead I said that when we were at Sheffield, they acknowledged that they were unsure about how to treat Freya and had sought counsel from other specialists in the UK, and I asked if she could do the same.  She agreed to seek advice from the other Cardiology units across the UK, and said she would bring Freya’s cardiology appointment forward by a week so we didn’t have so long to wait to see what was going on.  I still had a niggling doubt about why other experts gave different advice, but felt that I should trust those who were taking care of my daughter, particularly as they had seen Freya’s heart first hand and the others were simply going on the information that I sent them.

It was lucky really that our Cardiologist made the call that she did because of her concerns about gastrointestinal bleeding.  Before we had our conversation that morning (Wednesday 1st July 2015, Day 32) I had changed two nappies that both had specks of blood in them.  I remembered this happening once before in the hospital and the doctors hadn’t seemed too concerned about it so I decided it wasn’t anything to worry about.  However, the next dirty nappy (Freya was having about 15 poos a day!) had a significant amount of blood in it.  I contacted the Rheumatology Nurses in Sheffield to ask what I should do and they asked me to take Freya in.  So, less than 48 hours after our discharge we found ourselves back in the car and on our way back up the motorway to the hospital.

“I’m afraid to tell you that we are back at Sheffield Children’s Hospital.  I’ve not written since Monday because Monday night we brought you home…We didn’t do very much. We cuddled a lot! You ‘played’ on your teddy bear playmat – you hated it before all this started and now you love it.  Those beautiful blue eyes of yours, deep as the ocean, bulged with amazement at all the new things you saw.  Yesterday you went in the garden for the first time.  You laid on a blanket in the shade of the playhouse and laughed at the washing blowing on the line.  I could see that you could hear the birds singing in the trees.  It was wonderful sweetie.  Simple things; you and me.” 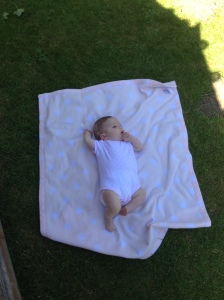 The blood in Freya’s nappies would get worse as the evening went on, and into the following morning.  I had been advised to save the nappies so the medical staff could take a look.  By the morning I had a collection of dirty nappies in our cubicle so I asked the nurse if they needed to take them to look at them.  As I said, Freya always had a lot of dirty nappies so I was glad when she took them away!  The following day we were visited by the Gastroenterology team. The consultant said that they had looked at Freya’s nappies and saw nothing too concerning.  I was really surprised; the last few nappies had been full of blood.  I expressed my surprise and from what the consultant said in reply I knew they hadn’t seen all the nappies.  Lucky then that I had taken photographs of the contents of every one and was able to show them.  As soon as the consultant saw the photographs she said “now that changes everything” and thanked me for having the foresight to take photographs.  The nurses had thrown the nappies in the bin and they had not seen them.  Taking photographs had become a bit of a habit for me.  Before the diagnosis was reached, Freya’s rash would come and go and you could guarantee that by the time the consultant came to see her it would have gone.  So I took photographs of any visible changes in Freya’s condition, which helped the medical staff see the things they otherwise would have missed.

The Gastroenterologist believed that the bleeding was likely to be caused by the aspirin and said that it would need to be stopped.  I jumped in, “I think you should discuss that with LGI; aspirin is the only thing that is preventing her from having a heart attack, I think they will have something to say about you stopping it.” They were not aware of the full situation and agreed they would discuss with our Consultant and the Cardiologist.  Not surprisingly, the Cardiologist advised strongly against it.  Instead Freya was sent for an ultrasound of her abdomen and the dieticians prescribed a mild baby milk formula which is non-dairy, called Neocate.  The Rheumatology Consultant informed me that he would be weaning Freya off the steroids sooner than planned, and that should we need to take any further action for the bleeding (an endoscopy for example) he was prepared to stop the aspirin temporarily as it would remain in her system for long enough to create a window of opportunity for treatment of this new concern.  After less than a day on the new milk, the bleeding stopped.  The ultrasound of Freya’s abdomen showed an abnormality in the position of the arteries in her bowel.  The gastro team mentioned something called malrotation and said that Freya would have a Barium Swallow Test in a few days. Just when I though there were no more tests or procedures left for her to go through.

“I am so worried about you. You are so small and you have been through such a lot.  When is it all going to end?  I feel a huge sense of loss.  I still have you, but I have lost your health.  The heart you were born with is broken and may never be the same again.  You will be on medication for many years and hospitals will be a big part of our lives.  This is the new normal for us.  We won’t know for some time what impact this will have on your life.  What limitations might be placed upon you, or us.  Can we travel…? Can we even fly with you?  Will you be able to do anything you want to do as you grow up?

...You most certainly have been sent into this world to shake things up little lady.  Our lives may never be the same again, but our lives are richer for having you in it.”