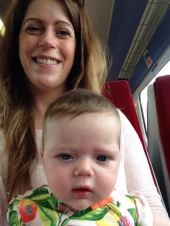 So we had a follow-up cardiology appointment in Leeds on Thursday, and those of you who follow Freya’s Story on Facebook will already know we had good news.  The right coronary artery has normalised, measuring 2mm now.  The left coronary artery was the worst affected to begin with, with the largest dilation measuring 5.2mm.  That has now reduced to around 3mm, which was fantastic news!  I asked the registrar if it was unusual to see such dramatic improvement so early on, given we were told it could take 1-2 years for that to happen, and he said that it is unusual, but not so unusual in very young babies.  It seems they are more resilient and able to repair themselves more quickly.  I am still confused about the ‘a’ word.  When the first echo showed dilation of the coronary arteries the doctors didn’t use the word ‘aneurism’.  A few days after that, and after a dose of IVIG, the echo showed that Freya’s arteries were further dilated and there was at least one aneurism.  When we were in Leeds, the doctors talked about the aneurisms and told me the risks associated with that.  Now they don’t seem to use the word, referring more to a general dilation of the arteries, known as ectasia.  I asked the registrar on Thursday to clarify this, and he said that it didn’t matter what we called it, the risks were the same and we shouldn’t get too hung up on a name.  He used the phrase “as far as I can see”, which I questioned.  So now I know that an echocardiogram can only show so much of the arteries; they can see about 3mm into each artery, but no further.  In order to see further into the artery a cardiac catheter is required, which he said would be ‘overkill’ in Freya’s case.  You can’t help but worry when you hear things like that, but I have to put my trust in the doctors that if they felt it was necessary to carry out further tests they would have done it.  For now, I’ll take the good news!  I also asked if the risk of stenosis (narrowing of the arteries) would be increased due to the speed of recovery of Freya’s arteries.  He replied that this is the time that the risk of stenosis is increased anyway, but the risk wasn’t any higher in Freya’s case.  I guess that it is the period in which the repair is taking place that the risk of stenosis is there – it is basically a narrowing of the arteries caused by a build up of scar tissue.  Freya will be seen again in a month, so we will wait until then to see how things are going.  The other bit of good news is that they are going to see if we can be transferred to the care of the Cardiologist at our local hospital, which will make things much easier logistically speaking.  We are still having the battle over her medication though, so the hospital gave us a prescription for her aspirin for the next month and we have left it in their hands to battle it out with our GP.

The thing with this illness is that there are so many ups and downs.  As a parent it is so exhausting.  Being positive one minute and feeling hopeless the next is emotionally draining and really takes its toll on you mentally.  Reading back through my journal to bring Freya’s Story to you has really brought that to light.  One day the entry would be full of sadness and despair, and the next day would be a ‘normal’ day, sometimes even bright and happy.  If you read post number 12, you will have felt the fear and sadness I did on the days after we returned from the cardiology hospital.  The weekend was pretty tough.  I was devastated and I felt more alone than ever.  And yet my journal entry the following day was a complete contrast;

“What have I got to tell you about today then?  Not very much to be fair.  We had a quiet morning and you slept through until 6am, clever girl!  After a feed you went back off to sleep so I managed to sneak out to Starbucks to bring back some coffee and breakfast.  You were still asleep when I came back.  After I’d finished eating you cried a little, so I took you out of the cot and we snuggled up on my bed just like we did at home sometimes, and you slept in my arms for 2 hours!

Daddy came to see us at lunchtime.  I think he must miss having us at home, especially you.  I gave him the Father’s Day card you made him…Yes, you made it last week at the hospital in Leeds!  They painted your little feet yellow and stamped them onto the card.  He really loved it.  We will save it for you so you can see it when you are older.

The doctors came to see you today.  They are very pleased with how you are doing.  Mummy got a bit upset because I find it so hard to hear the doctors talk about how well you are doing when inside your little heart is broken…They want to keep you here this week to continue to observe you, and keep taking blood so they can make sure the inflammation from the evil Kawasaki’s stays away.  The plan is to wean you off the steroids and keep an eye on your blood results to make sure it doesn’t come back when you stop taking the medication…

..We talked about your illness and whether anything could have been done to diagnose it earlier.  The Immunology Consultant said that you have taught them many things about Kawasaki’s as yours was such an unusual case.

We went to x-ray again this afternoon for another echo scan on your heart.  The sonographer said it was your left coronary artery that has the aneurism.  She also said it has not got any worse since the last scan she did, so that is good news.  Hopefully this means the Drs have switched the inflammation off.

We have had a lovely day together.  I’ve not thought about the bad stuff once, I’ve just enjoyed your smiles and almost-laughter, and lots and lots of cuddles.  I do hope your story has a happy ending.”