Moving to the specialist hospital came with its challenges.  It was a logistical nightmare for a number of reasons and put me an hour away from my children.  But it was the right place for us.  Initially Freya was under the care of an Immunology Consultant who worked with her team and the laboratories to try and find whatever this infection was, and where it was hiding.  By the time we left our local hospital, Freya has just one cannula in; the one in her head had been removed.  She still had the feeding tube, but she was much more accessible for cuddles with all the tubes and wires gone.  She drank a full bottle on the first evening, and I went to bed feeling that she was turning a corner.  The Children’s Hospital would now do their best to diagnose the illness, but said that there was a chance she could just get better and we might never know what made her so poorly.  She was a bit of an enigma to the medical staff.

It did feel like there was a real investigation under way.  Freya went for an echocardiogram on the Monday morning (Day 9) which showed nothing but a slight murmur, considered normal at her young age.  Her temperatures were settling down and she was feeding almost normally.  I truly believed she was getting better and we would be discharged without a diagnosis.  Some of her medication was changed.  I think they stopped the Gentamicin and replaced it with Meropenem.   They also added Acyclovir which is used to treat the herpes virus.  Her haemaglobin was low and the decision was made for her to have a blood transfusion.  I remember feeling shocked by that as it seemed such a drastic measure, particularly when I thought she was on the mend.  An MRI scan was planned to check Freya’s brain for any collections of infection that might be lurking there.  That’s where Group B Strep would be most likely to hide.

“You now have someone else’s blood entering your body.  Seems the blood I gave you wasn’t quite up to the job…I just found out that your blood group is B Negative.  Mine is B Positive (which is ironic really as I can be such a neghead at times!). But the good news is (if I remember my maths lessons correctly) that a positive plus a negative equals a positive.  Which is grand, because that is exactly what we are together.”

On Wednesday 10th June (Day 11) it seemed like we had taken 3 steps forward but 2 steps back.  The temperatures that I thought were a thing of the past returned, and Freya stopped feeding. 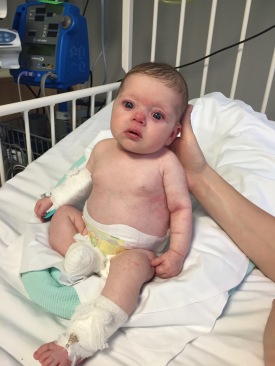 That was also the day of the MRI scan.  When the doctor told me that Freya would have to be sedated I fell apart.  I have this fear of general anaesthetic, always worrying that you might not wake up from one, so to be told my child would have to be put to sleep was hard to take.  I cried. A lot. I was relieved when in the morning the doctor said that they would try without sedation.  I had to feed Freya before we went down, and I had to swaddle her as tightly as I could in a blanket to keep her comfy and still.  I went in with her, and I was told that they would try Freya for a few minutes but if she wasn’t still they would have to pause and sedate her.   They gave me a set of ear defenders and I sat down next to the machine and cried silent tears as I watched her tiny swaddled body enter the tube.  She shouldn’t have to go through this at her age.

I’ve heard that MRI’s sound like an aircraft, and yes that is true of the background noise.  What I wasn’t prepared for was the periodic sirens and hammering sounds that were deafening to me even with my ears covered.  Freya slept through 25 minutes in there without moving a muscle.  I took it as a sign of how good and strong she was.  Her consultant was concerned that she was too sick to be affected.

“The good news is that the scan didn’t show any abnormalities…  They were looking for collections of pus that would indicate an infection in your brain.  You have a big day tomorrow.  The doctors want to take a sample of your bone marrow.  That means that you will have to be put to sleep with a general anaesthetic and they will take you to theatre  for surgery… I won’t lie to you sweetheart, I am scared.  I know that one of the things they look for in bone marrow is cancer. I am sure that isn’t the case…but they are concerned that you don’t seem to be recovering very well and there could be an underlying condition that is hindering you from getting better.  And I am so frightened that you won’t wake up from the general anaesthetic.  Silly I know,  but I can’t help being scared because you are so precious to me.  Part of me doesn’t know if I can be there…when you go to sleep, but a bigger part of me knows we are in this together.  See you in the morning.”

That night I went home to rest.  It was a stupid idea.  By the time I got home I was a nervous wreck.  I hadn’t made any arrangements for the children in the morning, but if I did the school run I could be too late for Freya’s procedure.  Luckily, my mother-in-law and sister-in-law already had it covered.  I had a large glass of wine, and went to bed where I worried more than I slept.