A year ago, on this very Saturday (though it was the 30th May), we had our last day of ‘normal’.  My parents had visited from Kent to see their new granddaughter.  Freya was 7 weeks old and we went on our first family day out since Freya was born, to a local farm.  The sun was shining; it was a glorious day that told us that summer was on the horizon.  The unexpected baby we had thought would ruin everything was proving to be our best ‘mishap’ to date. We were smugly happy with our perfect little life. We watched our older children play in the sunshine, whilst their baby sister slept in her pram, and it was like we had our own little slice of heaven right there.

That evening my husband and I went out for dinner with my parents, and my mother-in-law sat home with the children.  It was a pleasant evening, and when we returned home there was nothing to report, other than the fact that Freya hadn’t wanted all of her bedtime bottle.  It was unusual, but not exactly a serious situation; perhaps she was too tired, too full, or maybe there were some teeth on the way.

The next morning Freya would wake for her morning feed, around 6am.  Except she was so snuffly and bunged up that she just couldn’t take the bottle and gave up pretty quickly.  I was concerned, because she had gone for so long without a feed through the night (I remember celebrating our first proper night’s sleep), but I put it down to the fact that her nose was just too blocked up to let her feed.  At around 9am, I made another bottle and tried again, but just as before she couldn’t manage to take the feed, and fell asleep in my arms from the effort.  “She’ll feed when she’s hungry,” I told myself, and put her down in her bouncy chair.  A couple of hours passed, and I began to get quite fretful that she hadn’t fed since the previous day, so I decided to wake her and try again.   It was about 11am.  When I went to get her out of the chair, I noticed how hot she felt and so I took her temperature with a digital thermometer.  38.3F.  She had a fever.  I remained calm, I mean kids do get sick, and she has an older brother and sister who come into contact with all kinds of germs at school.  She had been snuffly for a couple of days; she had probably picked up a bit of a cold.  So I sent my husband to Mothercare to buy a medicine dispensing dummy (if you haven’t seen these, they are fantastic for getting medicine into a little baby).  Meanwhile I hunted out the Calpol. From 2 months.  That’s what it says on the front of the box.  Many would have given the medicine; I mean, she was only a week away from 2 months, what harm could it do? But for some reason, I felt like I couldn’t take that chance.  Unsure what to do, I called the out of hours GP service (it was a Sunday, remember).

The doctor called us back pretty quickly, and asked me to explain what symptoms Freya had.  She wasn’t feeding.  She was sleepy (but she was a newborn baby, and sleep was pretty much all she did).  She had a fever.  And come to think of it, her little tummy was moving up and down quite a bit – she was working hard at breathing.  The doctor said we should take her to A&E, as it was unusual for such a young baby to have a fever for no reason.  And that is what we did.

I’m guessing it was around 3pm in the afternoon by the time we were seen at the local hospital.   I don’t remember what was said by the nurse/doctor that checked Freya over.  I remember telling them that I had tested positive for Group B Strep during the pregnancy, and that although I was treated with IV antibiotics during labour, it was pretty tight timing wise.  I was on high alert for late onset GBS infection in Freya, and I knew that if she had contracted GBS during labour, there was a chance that she could develop meningitis.  They did too.  So they sent us up to the children’s observation unit with a view to keeping her in overnight for observation.

That part is all a bit of a blur too.  I remember sitting in the waiting area, Freya, burning up, lying across my knee.  She was laid on some paper towels whilst my husband and I attempted to catch a wee in a kidney dish. We went into a small room, and a doctor came to check her over.  I can’t remember what he said, or why he felt she should be admitted to the Children’s Ward.  I don’t remember when they put the IV antibiotics in.  I just remember that’s what happened.  We were admitted to a private room, and my husband went home to our older kids.  I sat in a chair in the corner of the room with Freya sleeping in my arms.  She was connected by the IV to a machine that dispensed the medicine, and every time I moved the machine would set off alarming, and the nurses would come in.  I think I stayed there until the medicine had all been delivered to Freya’s tiny, hot little body, and then I decided we both needed to get some proper sleep.  By this time, it was quite late.  It may even have been the early hours of the morning.  The nurses came in every hour to complete their observations, and then I put Freya in the cot so she might be cooler, and I might manage some sleep in the chair. 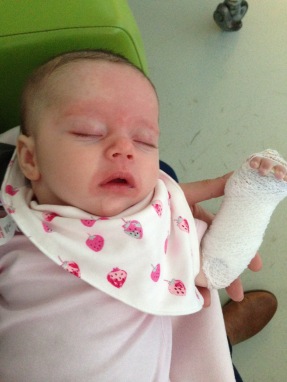 As I laid her down, I noticed that all familiar smell – she had a dirty nappy.  “The poor thing just needs to sleep, I’ll not disturb her” I told myself,  and I went back to my chair in the corner.  I’m not sure how long I sat there trying to get to sleep before my conscience got the better of me and I decided that I could not leave her in a dirty nappy. Disturb her or not, I needed to change her.  And it was as I lifted her vest that I noticed a pin-prick rash over her torso that I could just make out in the dim light.  I think it was about 5am, because it was starting to get light outside and I could hear the birds singing outside of our window.  Were my eyes playing tricks on me in the half light?  I was so tired.  I turned on the light and went to get a better look, but still in the fluorescent lights I couldn’t work out what I was seeing.  I walked over to the window and opened the curtains, and in that light I could see that this wasn’t an illusion.  Freya was covered in a rash.  I called the nurse who came to have a look, and we both spent so much time scrutinising that rash that I can’t remember to this day if it blanched under a glass or not.  The nurse called the on duty doctor, and by the time he arrived (which wasn’t long at all) the rash had spread down Freya’s legs and across her arms.

It was in that moment, watching the doctor silently complete his review of my baby, that I noticed the atmosphere change.  They called a consultant who joined the doctor in his silent inspection. It was very calm, but the air felt thick. I thought Freya was sleeping.  In fact she was unresponsive.  I remember hearing words like “shutting down”, and the doctors started to wheel Freya in her cot into another room.  It was the High Dependency Unit (HDU).  They delivered fluid boluses to Freya by stealth.  At 6am I called my husband “Gavin, I think you need to come quick.” 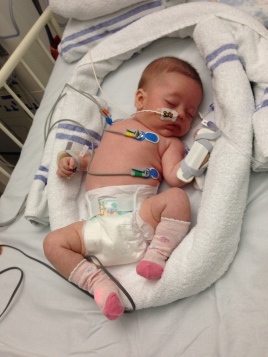 If you’ve followed Freya’s Story, you will know what happened next.  You’ll know that she became stable, but did not get any better for the next week, despite numerous antibiotics.  Her fever would not come down with antipyretics, and when her fever spiked (above 40 at times), so her heart rate would soar, and her oxygen levels would plummet.  She was very sick, yet it would take 13 days, lots of medication and countless tests before a diagnosis of atypical Kawasaki Disease would be reached.  Three hospitals would be responsible for her care during a six week incarceration (!) which began on the 31st May 2015.

I want to allow myself to believe all the motivational cliches about things happening for a reason, about how far we have come, about how lucky we are to have Freya here in our lives and how we should count our blessings.  But today that all feels like bullshit.  Today I find myself in mourning for normal.  I want to go back to that day at Cannon Hall Farm, where everything was blissful and beautiful and picture-book perfect, and somehow re-write history.  Today marks the anniversary of the last day we knew what normal was.  I wish that day were Groundhog Day and we could live it over and over and over so that the 31st May would never come.

I don’t want to wallow in the misery of the last year, believe me.  I want to be thankful for what we have, and cherish every moment.  I want to believe that this happened to us for a reason, that we will all be better people for it, that I will look back on all this one day and laugh at how wrapped up I was.  I will allow that to come, I’m sure (and the counsellor will give me a good kick up the arse if I don’t!), but for now I am allowing myself some wallow-time.  I have every right to feel sorrow, and to mourn the loss of the life I planned to have.  I have every right to feel angry that Kawasaki Disease came into my daughter’s life and robbed her of her health so soon after she arrived in this world.  I have every right to feel angry that the world keeps turning, and that people are moving on even though I seem to be stuck in this perpetual Kawahell.  Today, I hate Kawasaki Disease.  It broke my baby’s heart, and it broke mine too.

Most of all, I hate that this disease took away some of the joy that I ought to feel from moments like this… 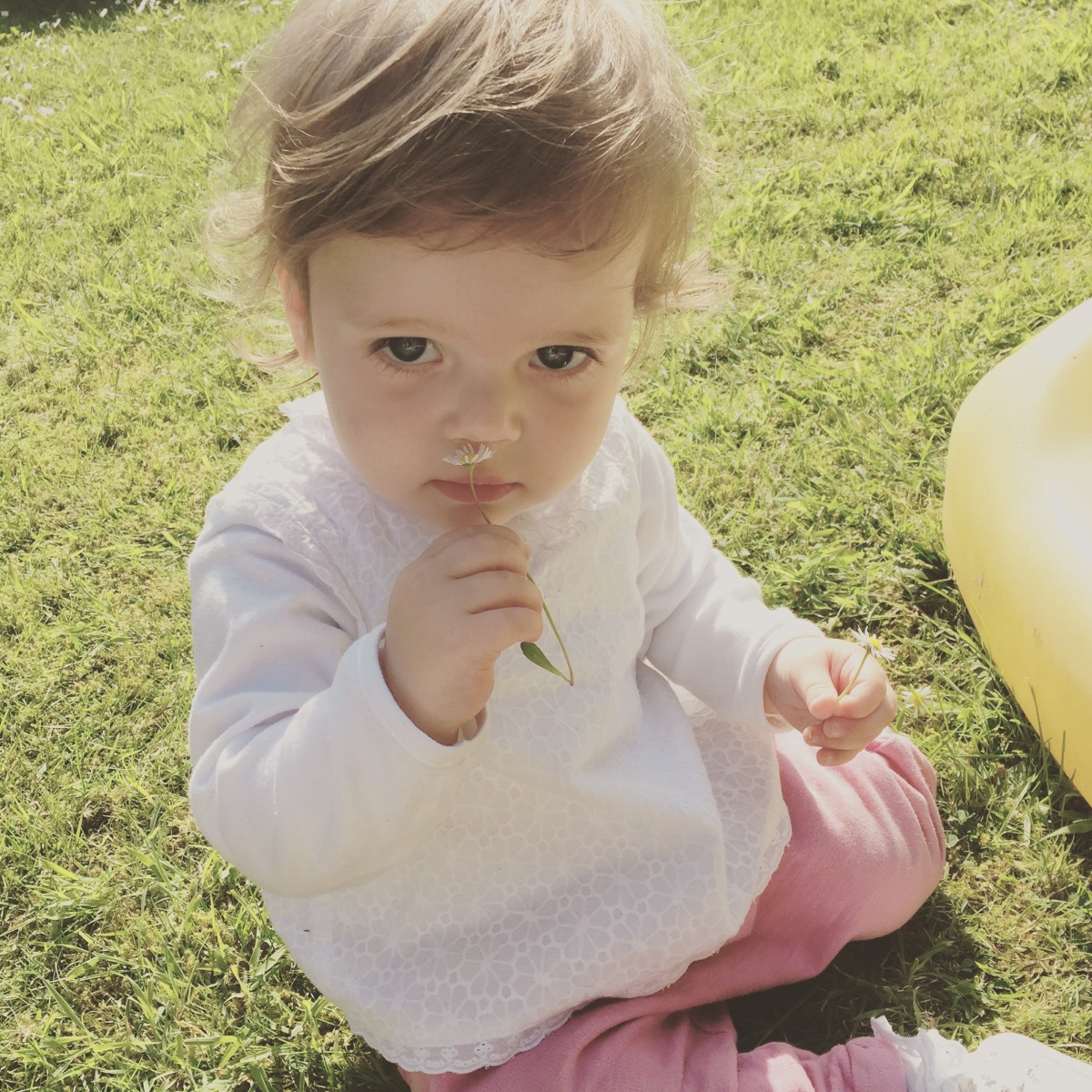 One thought on “Stealing Joy”